Johan Valcke studied archaeology and history of art at University of Ghent. He worked from 1975 until 2017 for the Belgian and Flemish government. In this position he organized many large and small events to promote Design and Contemporary Crafts, with an emphasis on the innovations within the genre.
In April 2018 he opened his gallery “Valcke Art Gallery” in his home town Ghent with focus on contemporary, witty, innovative and inspired (applied) art, national and international. 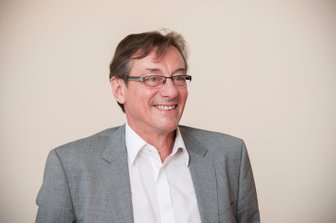 He was Director of Design Flanders from 1991 until 2017. Design Flanders organized talent scouting, developed and produced many design exhibitions, ran a gallery in the heart of Brussels, invited designers to participate at selected fairs (Köln, Milano, New York, Seoul, Tokyo, London, …), edited a quarterly magazine “Kwintessens” about design in Flanders and other publications, matched designers with companies and sensibilized SME’s and local authorities to use design and work with makers and designers.
Johan conceived the yearly Henry van de Velde Awards & Labels in 1994, which have become the most prestigious national design awards in Belgium.
Internationally, he co-founded World Crafts Council Flanders in 1981 and organized in August 1989 the fifth European Conference of the World Crafts Council, which was a breakthrough for the contemporary crafts in Flanders. In 1992 he was elected member in the Board of World Crafts Council – Europe and was nominated Vice-President. This mandate ended in 2000. He became board member a second time from 2012 until 2014. Design Flanders joined BEDA (Bureau of European Design Associations) early 2000 and Johan became board member from 2004 until 2011. In both positions he collaborated with many international organizations and institutions in the field of design and contemporary crafts.
Johan Valcke is author of many publications on design and contemporary crafts. He was member of the juries of national and international design- and (applied) art competitions.
Today he is member of the echo board of Designmuseum Gent and the General Assembly of HISK (International Post Master University College for Fine Arts). In 2013 he became board member of “Kunst in Huis” (organization for renting art to companies and individuals) and vice-president from 2020 to 2022. He seats in the Acquisition Commission for DIVA (the museum for silver, jewellery and diamonds in Antwerp) and was nominated in the Commission for the Arts (Adviescommissie Kunsten) of the Flemish Ministery of Culture. He acts as senior advisor for the Belgian Art & Design Fair.