The pots made by Tjok Dessauvage are not pots, but they look like it. One can call them “Potstructures”, bodies with a very specific form in space. They become a concept, what makes his work accepted in the fine art world and in the design space (free after Willen Elias)
Tjok however started as a potter and studied ceramics in the now called Luca School of Arts in Ghent (Belgium) with Joost Maréchal, pioneer of the post war Belgian ceramic scene. At first he was influenced by the ceramics from the Orient, Japan, China and Korea, but soon he developed - being an inspired artist and highly skilled technician - his own and innovative style. The iconic double-walled pot was born, created in the “terra sigilata” technique, an ancient Roman way of working with ceramics. It became his beloved ceramic technique. The slick, black or orange colored surface of the sculptures, have a tender skin. Touching such an object leaves traces, traces of the human touch on the skin of the sculpture however light the touch might be.
Developing those double-walled pots was the start of an incredible international worldwide career. Tjok took part in exhibitions all over the world: Belgium, Korea, Japan, France , Italy, etc... His pot-concepts are part of important private and public collections, e.g. Muzee Ostend, Designmuseum Ghent, Royal Museums of Art and History Brussels, Princessenhof Leeuwarden, Musée de la Porcelaine Nyon, International Museum of Ceramics Faenza, Inax Collection Tokyo and many more.
He became member of the prestigious “International Academy of Ceramics”, won de Premio Faenza and was awarded with the Henry van de Velde Award for career in 1996. 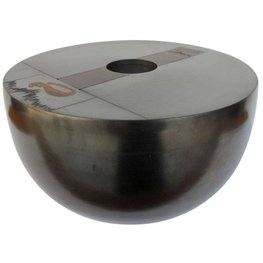 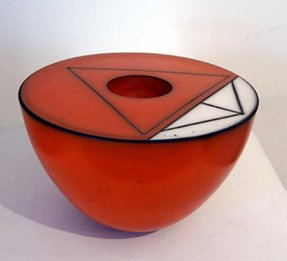