Abel studied in La Cambre, Brussels, where he obtained a master in ceramics in 2018.
When an object becomes a shape? Our glance leads us almost automatically to find the function in Abel’s objects. The face to face with an unknown object attracts Abel, like a strange tool at the bottom of the drawer whose usefulness remains to be defined. The object becomes a free form of interpretation, generating a dialogue between it and the observer. Removed from its functional context, the object is transformed into a free form. It is given a fictitious fact that needs to be explored and thus gives the passive user the opportunity to enter into a new dialog with the form. It is in this no man’s land space that he works. The fictional meaning becomes the functional meaning. Function is stretched to its impossibility and creates intriguing, sometimes absurd objects that are impossible to use. These concepts and research made Abel Jallais to start working with ceramics. It is basic for his objects that refers far back in history while its plastic properties allow to create a voluminous drawing. The handwork with its imperfections creates a tension in the quasi standardized forms and thus change the relationship with the form. 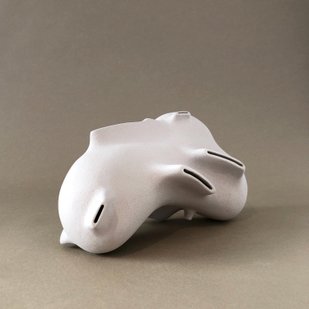